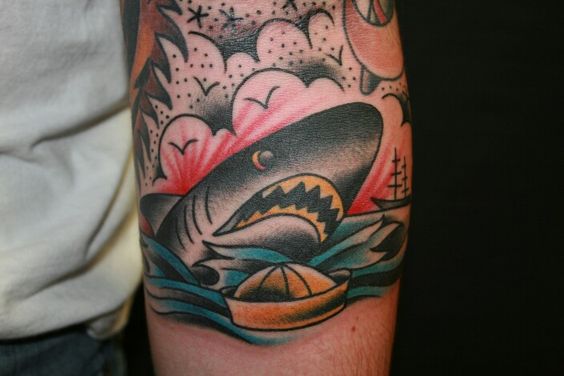 Shark tattoo as the shark itself for most people associate with fear or danger and causes panic. However, these magnificent animals have something more than just aggression. In this article, we’re going to dig into shark tattoos and their meanings. If you were thinking about getting a tattoo of a shark, keep reading – we’ve gathered a lot of excellent tattoo ideas.

The world’s most unloved and underrated animals

Sharks are large animals that can reach even up to 40ft long and inhabit different parts of the world. There are more than 375 different shark species. Fun fact – only 30 of them are dangerous to the humans. The best-known types of sharks are the great white shark, the bull shark, and the tiger shark. As for the tattoos, people usually choose the white and the hammerhead sharks.

Many people often see this incredible animal only as a devious being that is always looking for a victim. Because of the pop-culture, the shark became a symbol of a bloodthirsty murderer. Some aspects are real, but, the rejection of these animals made another huge problem. Scientists have warned, that the sharks may become extinct due to overfishing.

Of course, they are terrifying and dangerous animals. However, humans are much powerful than sharks. And there are many cases when animals extinct because of the human activities. So, we can do more harm to them, than they to us. Also, the humans can protect ourselves, while the sharks can’t hide from us.

In tattoos, sharks have more positive meanings that usually represent their intelligence. The primary symbols of the shark tattoos are power, courage, strength, and energy. They also symbolize the defense and protection of a family.

Ancient New Zealand tribes such as Maori called shark the king of the waters. It shows how much they feared, but also respected this animal. For them, it was a symbol of the leadership and dominance.

Another crazy reason why some people choose to get a shark tattoo is the surviving of the shark attack. Encountered with a shark in the open water and stayed alive? That’s a pretty good reason to engrave this event on your body.

We’re sure that if you came here wanting a shark tattoo, you didn’t learn anything new. If you were not sure about whether you want it – we hope you decided to get it. Either way, we invite you to take a look at our collection of tattoo ideas of sharks. This animal deserves to be on your body!