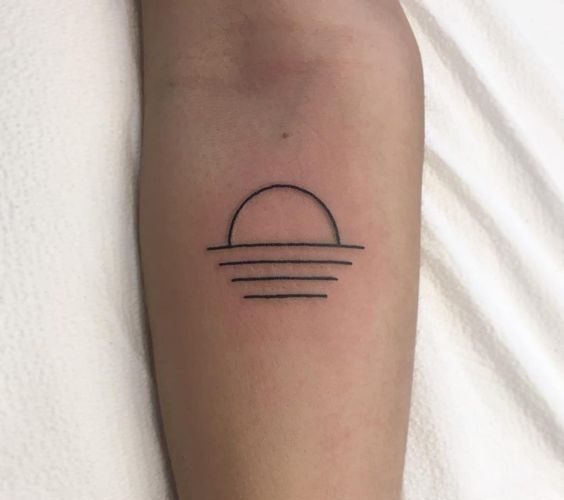 Small sun tattoos represent one of the symbols that has fascinated humans since the dawn of man. Man always knew that the sun gives life. It nourishes, feeds and keeps us alive. Therefore, lots of cultures worshiped the sun as a God. Today, we see sun tattoos as a symbol of the powerful influence that it hand for many centuries and will have for many years to come.

What do small sun tattoos mean?

Before it became a favorite tattoo design, the symbol of the sun has always represented the most significant thing in our universe – life. For many centuries, lots of cultures worshiped the sun as God.

Since those ancient times, people always wanted to pay their respects to their Gods. So they built temples, shrines, and sanctuaries. They wrote songs, created jewelry and made various sacrifices to their Gods including the sun. Body art was no exception. Like any other paintings or carvings on the walls, tattooing was also a way to honor the Gods.

Today, small sun tattoos are one of the most popular forms of self-expression. People choose to get a small sun tattoo as a symbol of some of their life events, for example, the birth of a child.

Let’s take a look at some best small sun tattoos, combined with other elements or just plain sun tattoo designs. We hope you will get some inspiration for your next tattoo.

At first, let’s go back in time and take a look at our ancestors’ point of view when the sun had an enormous impact on their lives.

As we’ve mentioned before, the sun represents life. It is the reason why we can grow crops, go to sleep and rest. Not to mention a whole lot of other processes that are crucial to life’s existence. So, no wonder why our ancestors saw the sun as their god.

However, it had more than one symbol. It represented vitality, fertility and everything else related to life. Ancient Egyptians called it ‘Ra,’ the God of the Sun, while the Native Americans saw it as the ‘guardian of the day,’ that radiated energy and light and also had a power of healing.

Aztec saw themselves as “the People of the Sun.” That’s why you can see so many sun symbols all over their ceremonial vessels, temples and war flags. In fact, the sun is a very common and a primordial emblem of the iconography of the native Aztec culture.

The sun also has a particular meaning in Christianity. It is a symbol of energy, strength, power, and rebirth. For many people, Jesus Christ itself associates with the sun.

Over time, small sun tattoos became more popular and now have spread all over the world. So, if you are thinking of getting a small sun tattoo – now it’s a perfect time! Moreover, it is a unisex design so both men and women can have it. As for the body parts on which you can get a sun tattoo, the most popular ones are wrists, arms, ribs, ankles, and arms. But you shouldn’t settle only with these options. Since we are talking about small tattoos, there’s a lot of body parts where you can place it. Just be creative!

Heart Tattoos on Wrist: 40+ Tiny Hearts on Wrists for Girls

Heart tattoos on wrist are one of the most popular tattoo trends for girls right now. If you have been thinking of getti...