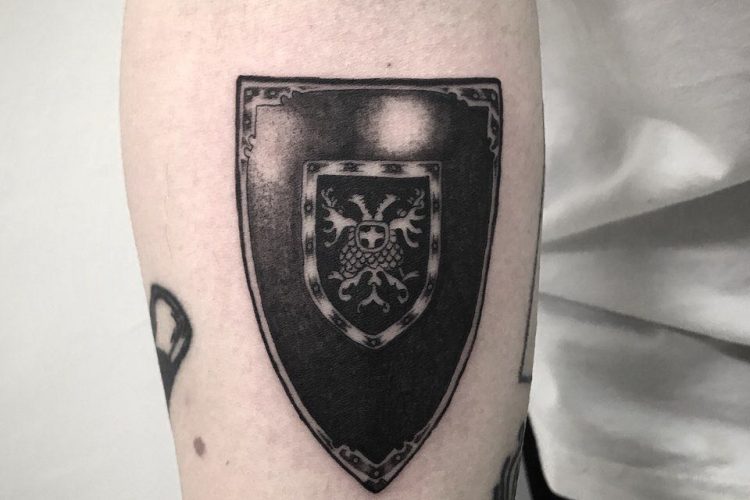 A shield is the oldest known useful defense tool used to protect against various weapons during the fight. One of the earliest found shields dates back to Sumerian period III millennium BC, Mesopotamia. Soldiers were using them as an active defense tool until the 17th century until they started to use firearms. However, even today we can see police squads throughout the world use ballistic shields for riot control. A shield has many variations and types, which makes it perfect for a tattoo. There are lots of beautiful meanings of a shield tattoo that we are going to go over in this article.

A shield – defensive armor used throughout the ages

A person using a shield usually holds it in the left arm, and it covers his or her body from the attacks without the need to use the right hand to counterattack. Due to its versatility, we can see that almost every culture in the world has used a shield for defense in fights. Depending on the region, people were making shields from various materials and in different shapes. Whenever they would invent a new, more lethal weapon, the shield automatically became thicker, or people would start to use better materials for it.

Although shields have different shapes and usually cover a more significant part of the body, any object that allows you to protect yourself from the opponent’s weapon is a shield. Nevertheless, with the invention of the firearms, shield became useless in the open battlefield. However, we can still find them in some regions with the tribal communities as well as the police squads that use shields to control the riots.

What were shields made of?

There were shields made of a single piece of wood or pieces joined from several elements. But throughout history, wooden shields have been the most popular. Usually, a wooden shield had an external element made of other material which gave it a better resistance and allowed to maintain its integrity during the blows. The leather is one of the oldest materials that people used for many things to make. There is evidence of leather on the shields since the Sumerian era. A well-prepared leather provides an excellent resistance from the arrows and spears.

Several layers of different materials provide better performance, rather than using one thick layer of the same material. Another element is copper that Sumerians used on the outer edges of the shield for the reinforcement. The bronze was an excellent alternative to copper, because it was more resistant, less flexible, and provided better protection. To learn more about the history of a shield click here – myarmoury.com there’s some pretty exciting stuff there!

Other types of shields and their meanings

We now know that the shield is the oldest known defensive armor. But, in today’s modern world where we no longer use them, and they only remain as symbols. Every country, town or municipality has its coat of arms which one of the main elements is a shield. We can also find them as symbols of soccer clubs, family heraldic, organizations, and other things.

Another type is ceremonial shields. As the name suggests, these were not meant for war, but only for special occasions such as parades. Until today, we can still see soldiers with shields during important visits of politicians. It is also a common symbol in the Catholic church since it protects the chest, and according to Christianity, the heart is where the right and good things are. From here comes the most important symbol of a shield – spirituality. It is a protection against the evil and falsehood.

Shield tattoos represent defense: it protects you from danger, risk, and unpleasant experiences. It helps you to avoid people that may harm you. In general – it is a symbol that reduces the impact of something negative. It provides shelter and security.

As we already know, a shield was an essential piece of armor that people used against the deathly blows. As beautiful as it looks, it was not a toy, but a thing that promoted wars and cruelty. Knowing this, we can surely say that shield is a symbol full of power, strength, and courage. Throughout history, it was a symbol of protection and sacrifice.

However, the image of this defensive piece can also express the inner strength or justice of a person. It can also be an ultimate symbol of good forces, continually fighting against the evil, cruelty, and immorality. A shield tattoo can express one’s desire to help for the weak and poor people. A shield with a cross may embody the divine power and is perfect for a Christian. It represents strong faith and a need to spread the word of God, to help others, and to make a world a peaceful place.

Very often people choose to get quotes or words together with shield tattoos. So, it can be a tribute to your passed family member that gave a strong foundation to your beliefs. Also, you can add a word that means the whole world to you, e.g., freedom, courage, faith and so on. As one of its most important symbols, a shield could signify your ability to protect others. Maybe you have a big heart and try to help others every time you can. Shield and sword tattoos may be a representation that you have served in the armed forces.

So, as we can see, there are many profound and interesting meanings of shield tattoos. It’s up to you to choose the one that suits you the most. Remember, that your tattoo can have an entirely different meaning than those that we have talked about. Take a look at our collection of shield tattoos. Maybe you will find that one perfect idea!