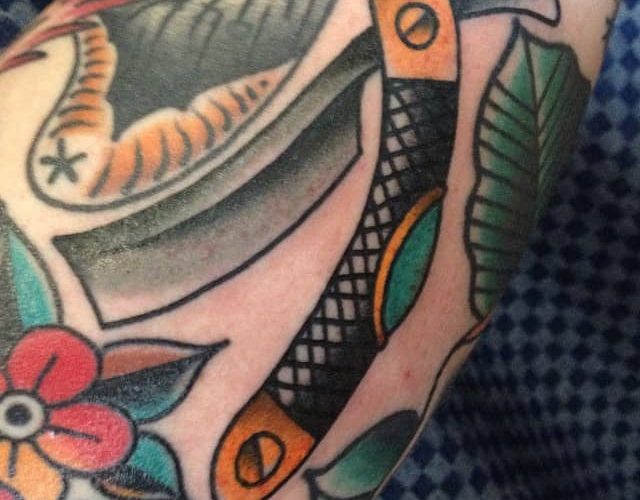 A straight razor tattoo is a perfect choice for barbers. It represents not only what you do but what you are as well. Sculpting beards and fading hair is your life? This tattoo could be a creative way to tell the world about your profession. It could express your passion for barbering.

Sharp blades could also represent courage and strength. It’s not only about the physical strength but the inner as well. Maybe you’ve overcome a traumatic event or something else in your life—a razor on your skin could mark this event.

It could also be a part of your style. Razor tattoo will look perfect together with a beard and a classic suit. Traditional designs are the most dominant, but there are many other choices. You can get a small razor on your inner wrist or forearm.

When Did Shaving begin?

Even if the idea of shaving appeared with the first man, it wasn’t easy to achieve. Imagine waking up in the morning of prehistoric times when you didn’t have a razor. How did the men shave back then? Some speculate they burned their beards and hair until they reached the desired length. Frankly, it doesn’t sound very safe, so you’d better use your electric shaver or razor blade.

With the discovery of iron in the year 3000 BC, the first razors appeared. And until the 17th century, the concept didn’t change much. During the Medieval era, barbering was a widespread profession; but it didn’t consist of only trimming a fancy goatee for a hipster client. Back in those days, together with shaving beards, a barber was pulling teeth and performing bloodletting. Barbering was a very respected profession and a razor was a strong symbol of social status.

A Bit of History

Although shaving is an old habit, we’ll go back to Ancient Egypt to start talking about the razor as a tool. Egyptians were the first to use a razor for shaving, which had a very fine blade and was made of copper. It was quite different from the straight razors we use today.

Years later, Charlemagne introduced the razor that created the Egyptian culture in the Roman Empire. From here, the so-called “Tonsor” appeared, who were the barbers of the time. They shaved men with sharp knives called “novacula.” The shaving process was far from what we know today because they didn’t use any product to prepare the shave. Back then, the barbers only used water, which caused multiple cuts and problems. That’s why professional barbers were important figures that could perform a close shave avoiding cuts.

Greeks and Romans had a custom of carrying their sword and knife to battle with them. The soldiers had to shave clean to prevent the enemy from grabbing them by the beard and killing them.

The fashion of wearing a beard does not arrive until much later, specifically when the Christians come to power. The clerics wore large beards that were a symbol of wisdom. In the Byzantine Empire, men shaved to differentiate themselves from other ethnicities.

In 1740, Benjamin Hunstman (watchmaker and inventor) created a steel knife with a concave edge. This gadget quickly became trendy, and the English started manufacturing this type of knife.

The Decline of The Straight Razor

The year 1901 changed the way men shave dramatically. An American businessman King C. Gillette invented the disposable razor blade, which was a serious setback for barbershops and classic razors. Men started using disposable blades and no longer had to worry about sharpening their old razors. Although Gillette took all the fame until today, the first inventors of the razor blade were the Kampfe brothers in 1888.

Even more so, in 1931, Jacob Schick invented the electric razor. Although its success was not immediate, over the years and later, people started buying electric shavers, which reduced the classic razor’s popularity even more.

Gillette, which had revolutionized shaving, had a problem with its blades. Because they made the blades from carbon steel, they oxidized quickly, which was a tremendous inconvenience. But in 1965, the Wilkinson Sword brothers created stainless steel blades, which were a substantial advance since they did not rust and could be used until they became dull.

Hipsters and other enthusiasts have been recovering the old barbershop concept from oblivion in the past decade. You can now find many barbershops in almost every town, offering classic and close razor shaves.

It has become not only a part of style but a routine or a ritual for many men. Nevertheless, you can only achieve a clean shave with a classic razor. That’s why it will never go out of style. 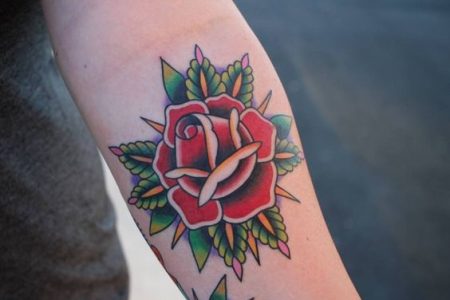 Traditional rose tattoo is a choice for those who don't like the modern style. Today, the rose itself is undoubtedly one...

Sword tattoos have always been one of the most popular traditional designs. You can find a sword design at almost every ...